Where the Tall Corn Grows 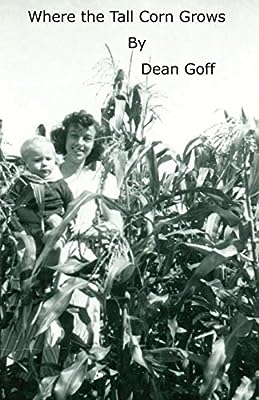 Price: $16.95
As of 2020-02-27 11:17:57 UTC (more info)
Product prices and availability are accurate as of 2020-02-27 11:17:57 UTC and are subject to change. Any price and availability information displayed on http://www.amazon.com/ at the time of purchase will apply to the purchase of this product.
Availability: Not Available - stock arriving soon
Buy Now from Amazon
Product Information (more info)
0 0
CERTAIN CONTENT THAT APPEARS ON THIS SITE COMES FROM AMAZON SERVICES LLC. THIS CONTENT IS PROVIDED 'AS IS' AND IS SUBJECT TO CHANGE OR REMOVAL AT ANY TIME.

Author Bookstand is proud to offer Where the Tall Corn Grows by Bookstand Publishing.

Where the Tall Corn Grows has generated a lot of interest and excitement and we think it would be an excellent addition to your library.

Dean Goff, after retiring from a long military career, took some creative writing classes to broaden his horizons. With encouragement from teachers, fellow students and members of his writers groups, Dean decided to put his stories and poems in a book for all to enjoy. "Where the Tall Corn Grows", his final book, includes stories of growing up the youngest of four children on the family farm in Ruthven, a small town in Northwest Iowa. This book comprises a family history of the people who came to Iowa and how the farm was acquired and expanded. The stories included are about life lessons that he learned from growing up on a farm and also growing up with a couple of mischievous older brothers. Since Dean was born in 1925, he grew to manhood in pre-World War II. Due to growing up in this era, he has included a group of letters written to his brother, Paul, who could not join the military because of a bad eye. These letters are about Dean's adventures in boot camp, training schools and his first deployment overseas. The final chapters in this book consist of poetry he wrote throughout his adult life.

Where the Tall Corn Grows

Resuscitation of the Soul

The Hunched Man and Other Poems

Bending Serendipity a Book of Love Self ...