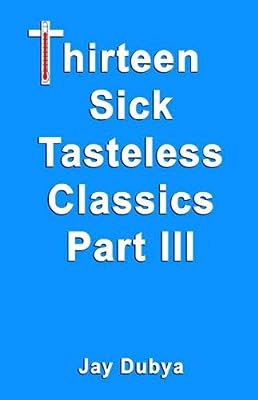 Price: $30.95
As of 2020-04-04 11:51:27 UTC (more info)
Product prices and availability are accurate as of 2020-04-04 11:51:27 UTC and are subject to change. Any price and availability information displayed on http://www.amazon.com/ at the time of purchase will apply to the purchase of this product.
Availability: Not Available - stock arriving soon
Buy Now from Amazon
Product Information (more info)
0 0
CERTAIN CONTENT THAT APPEARS ON THIS SITE COMES FROM AMAZON SERVICES LLC. THIS CONTENT IS PROVIDED 'AS IS' AND IS SUBJECT TO CHANGE OR REMOVAL AT ANY TIME.

British literature is not spared bombardment with scathing satires of Saki's "The Interlopers," H.G. Well's "The Time Machine," W.W. Jacobs' "The Monkey's Paw" and Geoffrey Chaucer's "The Pardoner's Tale."

Norse mythology is thoroughly broadsided with a new adult rendition of "Beowulf" and Greek mythology is also attacked with a new humorous version of "Theseus and the Minotaur." The French short story is not spared as Jay Dubya presents a new witty corruption of Guy de Maupassant's "The Necklace," and Spanish literature is also blasted with a funny spin put on Miguel de Cervantes' "Don Quixote Fights the Windmill."