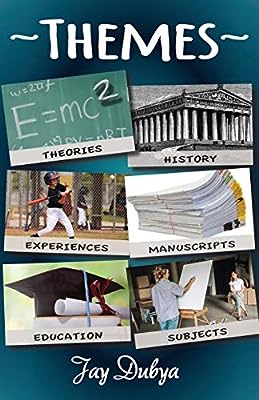 Price: $16.95
As of 2020-06-05 17:36:29 UTC (more info)
Product prices and availability are accurate as of 2020-06-05 17:36:29 UTC and are subject to change. Any price and availability information displayed on http://www.amazon.com/ at the time of purchase will apply to the purchase of this product.
Availability: Not Available - stock arriving soon
Buy Now from Amazon
Product Information (more info)
0 0
CERTAIN CONTENT THAT APPEARS ON THIS SITE COMES FROM AMAZON SERVICES LLC. THIS CONTENT IS PROVIDED 'AS IS' AND IS SUBJECT TO CHANGE OR REMOVAL AT ANY TIME.

Author Bookstand is proud to offer Themes by Bookstand Publishing.

Themes has generated a lot of interest and excitement and we think it would be an excellent addition to your library.

THEMES is a collection of fifty-two short manuscripts: nineteen of which are articles and stories along with thirty-three of which are essays that reflect the author's personality and philosophy. Articles range from biographical sketches to some of the author's humorous adventures, and then the manuscript section is dedicated to the writer's observations about matters running the modern social spectrum from the Iraq War to inherent problems associated with American democracy.

Jay Dubya is author John Wiessner's pen name, and it is also a corruption of his initials J.W. John is married to wife Joanne and the couple has three grown sons. Jay Dubya's books exist in hardcover, in paperback and in Kindle, Nook and Smashwords ebook formats. The author is a retired New Jersey public school English teacher of 34 years experience, and John and Joanne live in Hammonton, NJ, USA.

Life & Laughter: A Compilation of Fa...