The Wholly Book of Genesis 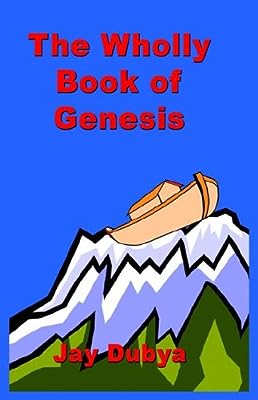 Price: $26.95
As of 2020-01-18 10:51:59 UTC (more info)
Product prices and availability are accurate as of 2020-01-18 10:51:59 UTC and are subject to change. Any price and availability information displayed on http://www.amazon.com/ at the time of purchase will apply to the purchase of this product.
Availability: Not Available - stock arriving soon
Buy Now from Amazon
Product Information (more info)
0 0
CERTAIN CONTENT THAT APPEARS ON THIS SITE COMES FROM AMAZON SERVICES LLC. THIS CONTENT IS PROVIDED 'AS IS' AND IS SUBJECT TO CHANGE OR REMOVAL AT ANY TIME.

The Wholly Book of Genesis is adult humor featuring adult situations, language and content. The book satirizes the Story of Creation, The Great Flood, The Tower of Babel, Sodom and Gomorrah and the families of Abraham, Isaac and Jacob. The author (a former English teacher) also finds fault with grammatical problems in Genesis such as poor pronoun-antecedent constructions, redundancy and weak organization of content.

A young Arab terrorist named Mohammed Kareem Jihad discovers in a mountain limestone' cave ancient papyrus renditions of the books of Genesis and Exodus. He rushes into Jericho and sells his discoveries to two archeological researchers, Professor Philip Collins and Dr. Allen Qaeda, who buy the precious ancient scrolls from young Mohammed for a carton of cigarettes, two hand grenades and a used AK-47.

Professor Phil Collins was an authority on the Book of Genesis, and Dr. Al Qaeda was a scholar on the Book of Exodus. They translated the versions (which preceded the Dead Sea Scrolls by many centuries) and found that about half of the Books of Genesis and Exodus had been edited out by ancient scribes and priests to make the texts more moral and virtuous.

After translating the new renditions, Professor Philip Collins e-mails copies of the translated texts to his nephew, the author. A day later a Palestinian rocket hits the Jerusalem home where the men were doing their valuable research. Both Professor Phil Collins and Dr. Al Qaeda were killed, and the original documents were also destroyed in the missile attack.

The only remaining versions were the electronic e-mails that are now files in the author's computer. Jay Dubya now presents the unabridged translation of the Wholly Book of Genesis.

The Wholly Book of Doo-Doo-Rot-on-Me