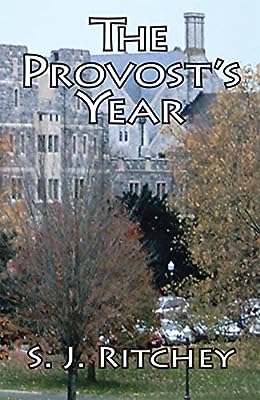 Price: $14.95
As of 2020-05-30 02:30:19 UTC (more info)
Product prices and availability are accurate as of 2020-05-30 02:30:19 UTC and are subject to change. Any price and availability information displayed on http://www.amazon.com/ at the time of purchase will apply to the purchase of this product.
Availability: Not Available - stock arriving soon
Buy Now from Amazon
Product Information (more info)
0 0
CERTAIN CONTENT THAT APPEARS ON THIS SITE COMES FROM AMAZON SERVICES LLC. THIS CONTENT IS PROVIDED 'AS IS' AND IS SUBJECT TO CHANGE OR REMOVAL AT ANY TIME.

Author Bookstand is proud to offer The Provost's Year by Bookstand Publishing.

The Provost's Year has generated a lot of interest and excitement and we think it would be an excellent addition to your library.

As he assumes the Provost position at State University, Jason Spradlin is confronted by events he'd never anticipated. His response to an NCAA query about grades of football players ignites a series of threats to him and his family. Attempts to bomb his car, burn his home, and kidnap his daughter ensue until Jason and the authorities are able to nab this big supporter in the process of bribing a star recruit. Jason's plan to reduce the bureaucracy within the institution raises the hackles of some faculty who see his effort as deleting their authority. He antagonizes a prominent dean who forces Jason to meet with him and his supporters as they challenge the Governor to override the decision. Jason and his two older children rescue a man who has fallen in the forest and is unable to move. The man responds by giving a huge amount of money to the institution for scholarships and sets up trust funds for the youngsters' education.

The Secret of the 48th Foot

All That Glitters: A Georgian Historical...

Dreams: A Novel by Estelle Feldman