The Making of a Chicano Educator: From My Segundo Barrio to Korea - A Memoir 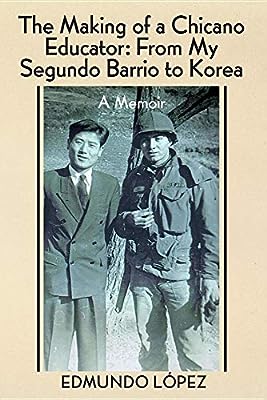 Price: $14.95
As of 2020-07-12 03:37:05 UTC (more info)
Product prices and availability are accurate as of 2020-07-12 03:37:05 UTC and are subject to change. Any price and availability information displayed on http://www.amazon.com/ at the time of purchase will apply to the purchase of this product.
Availability: Not Available - stock arriving soon
Buy Now from Amazon
Product Information (more info)
0 0
CERTAIN CONTENT THAT APPEARS ON THIS SITE COMES FROM AMAZON SERVICES LLC. THIS CONTENT IS PROVIDED 'AS IS' AND IS SUBJECT TO CHANGE OR REMOVAL AT ANY TIME.

Author Bookstand is proud to offer The Making of a Chicano Educator: From My Segundo Barrio to Korea - A Memoir by Bookstand Publishing.

The Making of a Chicano Educator: From My Segundo Barrio to Korea - A Memoir has generated a lot of interest and excitement and we think it would be an excellent addition to your library.

Chicano educator Edmundo López invites his readers to go back in time with him yet again, to peer through the cracked window of his family's two-room tenement apartment in South El Paso's Segundo Barrio - the Second Ward - to feel his sadness as he says goodbye to his friends, his beloved Bowie High, and his adventurous youth. His journey leads him to a very different life in California, where the lessons and gifts of his barrio back home eventually lead him toward a career in education.

His colorful stories take us through his challenging, often hilarious teenage years, complete with awkward dates and devastating crushes, into Basic Training and then on to post-armistice Korea where he and his fellow prankster-soldiers forge friendships and find clever ways to combat boredom while fulfilling their commitments. López crafts his stories with care, infusing them with equal measures of love, loyalty, attitude, and humor. Even when his memories take a darker turn, recalling the deep-seated resentments and racism that he and his fellow Chicano soldiers encountered while serving their country, the author's unique style of barrio-bred, feisty defiance and determination both entertains and inspires.

The Making of a Chicano Educator: From My Segundo Barrio to Korea, picks up where the author's first book, My Romance with my Segundo Barrio, leaves off.

Quest of a Bipolar Soldier

More Than Gray Hair and Glasses

The School That Fell From The Sky