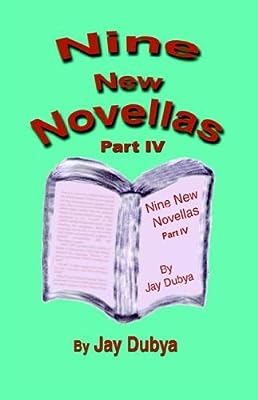 Price: $24.95
As of 2020-07-12 18:10:38 UTC (more info)
Product prices and availability are accurate as of 2020-07-12 18:10:38 UTC and are subject to change. Any price and availability information displayed on http://www.amazon.com/ at the time of purchase will apply to the purchase of this product.
Availability: Not Available - stock arriving soon
Buy Now from Amazon
Product Information (more info)
0 0
CERTAIN CONTENT THAT APPEARS ON THIS SITE COMES FROM AMAZON SERVICES LLC. THIS CONTENT IS PROVIDED 'AS IS' AND IS SUBJECT TO CHANGE OR REMOVAL AT ANY TIME.

Nine New Novellas, Part IV is author Jay Dubya's eighth story collection written in the spirit of Pieces of Eight, Pieces of Eight, Part II, Pieces of Eight, Part III, Pieces of Eight, Part IV, Nine New Novellas, Nine New Novellas, Part II and Nine New Novellas, Part III bringing the writer's novella total up to sixty-eight.
"The Bounty Hunter" is a unique tale that mixes suspense with a well conceived revenge plot, "Batsto Village" is a sci-fi time travel adventure with a clever surprise ending and "Dreamland" describes dramatic conflict in the life of a man whose dreams suddenly become reality.
"Colliding Galaxies" is a science fiction offering that provides a rational explanation for man's petty place in the Universe, "Greek Statutory Law" describes how an American immigrant becomes wealthy and then is affected by the power of mythology, and "Specters" depicts a man who develops the ability to have the ghosts of famous people become his modern day servants.
Finally, "A Small World" is a chilling story that shows how a computer genius uses miniaturization to get even with past enemies, "The Music Disk" tells how two friends have lyrical adventure that ends in disaster, and "The Amazon Sorority" is an imaginative tale about two astronauts discovering a civilization dominated by ancient women warriors in the Constellation Virgo.

What Is This Thing Called Love

It's Never Too Late For Forgiveness

The Ignition of Light

In The Midst Of It All